How to know when your wine is corked? 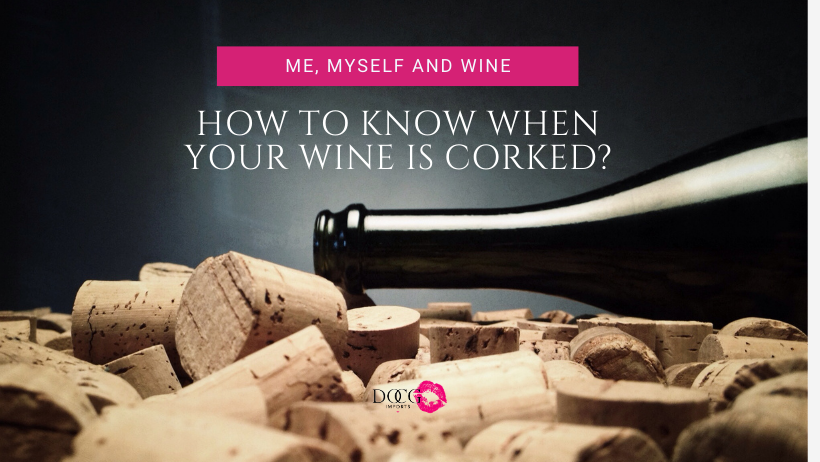 We all love corks, right? They're wonderful and kind of emotional closure for wine. It's very lovely to uncork a bottle of wine, to hear the pop on champagne. We can do all kinds of some things with corks. We can make coasters or things to decorate our home, filling jars, but sometimes the cork, a natural cork, creates a problem in wine.

Some of our followers and friends have asked, how do you know when a wine is corked? It's not as easy as you might think. But it's also not very difficult. You just have to train your nose to pick up the odor, the aroma of corked wine.
When a wine is corked, it's not that there's anything wrong with the wine, it's actually that something interacted negatively with the cork itself. When the phenolic compounds, chemicals that are used in the making of the wine or used in the cleaning of the winery equipment, interact with a little fungus that is sometimes present in a natural cork it creates a fault.

The result is something that smells damp or wet. If you can recall what a basement smells like or wet cardboard, a wet dog, anything that's kind of musty and funky, when you pick up that aroma on your wine it's likely that it's corked. That’s a defect that merits sending the wine back. If you're in a restaurant, ask the sommelier or somebody else to smell the wine. If they share your view that the wine is a bit musty and corked, they'll usually replace it. Also, with retailers such as myself, if one of my clients tells me that the wine they received, one of the bottles is corked, I'll happily replace it.
In fact, somewhere between 1 to 3% of all bottles of wine might end up being corked. That's about one bottle in a 12-bottle case on average. So, it does happen quite a bit. That said, you don't want to drink it because it's just not very pleasant.

A couple of things to remember when you do taste a wine that you think might be corked, besides asking somebody else to smell it, consider refreshing your pallet. Sometimes our palates get a little tired. You may have had a coffee just a little bit before trying the wine or something else and you may not have a very fresh palate. So, rinse with water or some say to even lick your arm a little bit just to get your mouth back to a natural state and then try the wine again. But if a wine is corked you definitely want to send it back.

Here’s something fun and useful you can do when you get a bottle of wine that is corked at the restaurant. When the waiter wants to take it away, ask them to leave you a little bit in a glass. When the new bottle of wine arrives, you’ll be able to smell the difference. This is a great way to teach your nose to pick up that aroma so that in the future it'll come to you more quickly.
The only way to know if a wine is corked is by smell and if the smell gets by you, sometimes it’s very light, it's not a problem. There's nothing really wrong with the wine but it does tend to modify the odor or the aroma and a lot of the beautiful qualities of a wine won’t show up. You won't get the bouquet that you would normally expect. For example, if you’re trying a bottle of wine that’s been reviewed or you have all the tasting notes from the producer and you're not picking up any of the aromas they list and you’re not sure if it’s corked, it’s likely that it’s corked.

So again, look for that wet, musty odor. If the wine is not presenting well, it doesn't really provide any of the wonderful bouquets or aromas that you were expecting based on what you read about the wine, have somebody verify it with you. But it's likely that you got a corked bottle. 1 in 12 on average is actually pretty good odds. If you drink a lot of wine as I do, it is going to happen!

Commenting has been turned off.